RSS Feed
← Artwiculate: Revenge of the Nerds over the Turds.
THE GOOD AND THE BAD OF TWITTER → 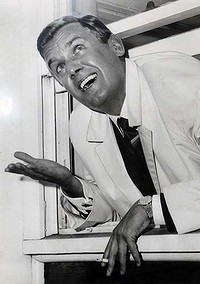 Every now and then the phone rings. It will be a call that can be life changing or open up possibilities for an unexpected journey that enriches the soul.  In August of 1980 I received such a call. It was from Faith Martin, an old friend and one of the nicest and most generous people in the Australian film and television industry. She asked me to send over some of the longer human-interest stories I’d done while working at Channel 7 and Film Australia. Send them I did.  She rang to tell me that Digby Wolfe had a project in mind, had seen my stories, wanted to meet me, and was I interested.

Was I interested?!  Digby Wolfe! You bet.  The first time the name Digby Wolfe entered my consciousness was in the TV show Revue 61 and 62.  My mum was a huge fan.

Off I went to meet Digby. He really was a very good-looking man with a ready smile, firm handshake all wrapped up in an urbane elegance.  But it was his extraordinary blue eyes that struck me. They twinkled and were full of intelligent understanding. Whether you were in a one on one chat in an office or in the middle of a crowded room, Digby would focus only on you and not scan the room to see who had arrived. He had the happy knack of making people feel special, and that whatever you were talking about was so very important it required 100% of his attention.

He was putting on a show. The show’s premise was that every person has at least one good story to tell and we would facilitate the telling. He criticized my existing TV reports because there was very little of me in them. I regarded that as a compliment. I had learnt in an earlier era that if journalists removed themselves from a story, leaving the talent to tell it, they had done their job well.

Digby’s show was going to do the opposite. The interviewer was going to be as much the ‘star’ as the subject of the interview.  He talked about what he wanted to do.  I listened.  I said yes.  I knew that the show would thrust me back into the spotlight for a time, a place in which I’ve never been comfortable, but after my first meeting with Digby I also knew I wanted to work with this man.  My job interview descended into a multi-hour chat primarily about politics, both domestic and international.  Digby was passionate about politics, and any chat would always turn to the current political situation. 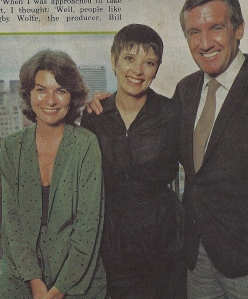 The 10 months pre-production and production period, before the show was unceremoniously dumped because of poor ratings, was the happiest work experience I’ve had in my eclectic career.  I worked with the most amazing group of people both in front of and behind the scenes, including Faith Martin, Ray Taylor, Robyn Nevin, Col Joye and Sarah Grant. Frank Hammond, Jebby Phillips, Dennis O’Brien, David Mitchell, Wil Davies, Roseanne Andrews-Baxter, on and on, writers, producers, editors, shooting crews – a funny, warm, generous group of people.  It was a pleasure to go to the production office. There was always the sound of laughter, quick-witted banter, political discourse and the work.

You can tell the measure of a man when he is a boss who inspires loyalty freely given, provides a working environment people break their neck to be in, and who maintains enduring friendships.  That was Digby Wolfe.

Not long after he returned to LA. I had my first child naming her Sophie. I received a telegram from him saying “Agh. A perfect choice”. I had no idea what he meant so I replied “But of course”, hoping that this telegram missive would cover all bases. Unbeknown to me a film was about to be released called ‘Sophie’s Choice’ based on a novel I should have heard of but hadn’t. Six months later when the film was released in Sydney I got the joke. When I had my next child, a boy we named Darcy, I received a telegram from Digby, which said, “Elizabeth would be pleased”. This I understood so my reply was “…as would Jane, I hope.”

My trips to LA throughout the 80’s, whether for work or pleasure, required lunch with Digby at his second home, the Beverly Hills Tennis Club, allowing me to have brushettes with the famous and infamous. The luncheon conversation would start with gossip about family and mutual friends, new films, theatre and show business generally before getting round to politics.  Lunch would finish when we remembered we had dinner engagements.

Digby wore his political heart on his sleeve. His political stance was unashamedly left of centre. He had worked on Bill Haydn’s Federal election campaign in 1980, not long before I’d met him.

He believed in social equality. His view was that governments had a responsibility to ensure the health and overall wellbeing of their people. Education should be available to all enabling talent to be recognized and potential realized. Discrimination in gender, race, sexual preference or religion must always be fought against.  The Reagan years in USA and the Thatcher years in his homeland UK, he found intolerable. A man who was so full of generosity of spirit railed against the meanness that had found a home in politics then and since.

During the mid-90’s our correspondence had dwindled to an annual letter of considerable length about anything and everything, and the odd telegram usually about a new film/play I absolutely had to see. As he said when I apologized for being the world’s worst correspondent, “Joanie, it’s called life”. And Digby Wolfe lived it to the full.

It would have been so easy after his successes in LA with ‘Laugh-In’ and ‘the Sonny and Cher Show’ to have fallen into that two-dimensional schmooze fest that is Hollywood.  He didn’t. He remained an engaging, intelligent, erudite, disarming, witty, fun to be with man, who saw everything in terms of possibilities and potential, who encouraged new talent to try, and old talent to try something new. His unending enthusiasm was infectious.  In a world of costume jewelry he was a diamond of the first water.

I wish I could be in Albuquerque, New Mexico for Digby’s memorial in June. I know it will be peppered with laughter as a life that was well lived and lived well is remembered.  Just know that in Sydney, his OZ family will share a drink as we thank him for letting us be a part of his life, and yes, it will be a cup of Earl Grey tea, black, no sugar and with a slice of lemon. 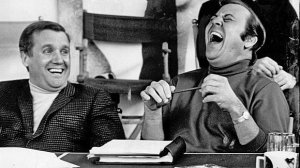 I am a frustrated cook who is also a lover of all sport, politics, film, TV, theatre and a standard poodle with attitude called Toss.
View all posts by boeufblogginon »
← Artwiculate: Revenge of the Nerds over the Turds.
THE GOOD AND THE BAD OF TWITTER →