Turnbull invites the #Ashbygate zombie to haunt his new government.

The Ashby Affair is like a zombie, one of the undead. You can’t kill it with an axe. It just keeps on walking, slowly and inexorably, towards those who were involved in this sorry saga.

While Mal Brough remains in Parliament the issue of his role in the tawdry affair will not go away.

Brough’s elevation to the Special Minister of State by new Prime Minister, Malcolm Turnbull, presumably for leadership spill services rendered, has reinstated the Ashby affair as an issue of concern, as it should. Not even Tony Abbott was prepared to appoint Mal Brough to any Cabinet position whilst question marks hung over the Ashby affair like the sword of Damocles.

It is ironic that among Brough’s new and probably most important duties, is the responsibility for those agencies which manage the integrity matters of a working Parliament; agencies such as, The Australian Electoral Office, the Ombudsman and the National Auditors, among others.

The key issue at the heart of the Rare’s decision in Ashby v Slipper is the abuse of the administration of justice. It was an application from Slipper’s lawyers that the case in which Ashby alleged sexual harassment by Slipper, be dismissed. By the time Rares’ brought down his decision to dismiss the case there was a mountain of evidence, raising serious doubts as to Ashby’s veracity and implicating others in the Ashby v Slipper saga.

One of those key others to benefit from Slipper’s political demise was Mal Brough, aka by his Ashby affair codename of Jacky. Many in the Opposition believed at the time that with a hung Parliament, getting rid of the then Speaker of the House, Slipper would bring down the Gillard Government, which was sufficient motivation for the apparent cloak and dagger operations as outlined in so many of the emails and text messages submitted in evidence. It did not bring down the Government as it happens, but Brough went on to win Slipper’s old seat in the 2013 Federal election, and Tony Abbott become PM.

The Rares’ decision was over-turned by a split decision of the Full Bench of the Federal Court essentially on a technical issue of uncontested evidence. All evidence given by Ashby and Harmer went unchallenged by an unrepresented Slipper and was therefore, in the view of two of the three judges, a failure by Rares J.

In the concluding paragraphs of their majority judgement Mansfield J. and Gilmour J. said as follows:

“We are satisfied that the evidence before the primary judge [Rares} did not warrant the adverse finding said to constitute an abuse of the Court’s process on the two bases found and did not warrant the rejection by His Honour of the sworn and unchallenged evidence of each of Ashby and Harmer.” Ashby Appeal decision Mansfield J and Gilmour J (par.225)

This was in response to those paragraphs in the Rares judgment, which included the following:

“Having read all of the text messages…as well as the other evidence, I have reached the firm conclusion that Mr Ashby’s predominant purpose for bringing these proceedings was to pursue a political attack against Mr Slipper and not to vindicate any legal claim he may have for which the right to bring proceedings exist. …As Mr Ashby and Ms Doane agreed in their texts of 30 March 2012 what they were doing ‘will tip the govt to Mal’s [Brough] and the LNP’s advantage”: [66] Rares decision para.196

“…Mr Ashby acted in combination with Ms Doane and Mr Brough when commencing the proceedings in order to advance the interests of the LNP and Mr Brough. Mr Ashby and Ms Doane set out to use the proceedings as part of their means to enhance or promote their prospects of advancement or preferment by the LNP, including by using Mr Brough to assist them in doing so. And the evidence also established that the proceedings were an abuse of the process of the Court for the reasons I have given…” Rares J [par. 199]

Siopis J, in his minority decision, did what judges are supposed to do, and weighed the abundant evidence before coming to a decision that the appeal be dismissed. He believed the evidence substantiated Rares’ J judgment that the process had been abused and therefore tainted.

There is an irony to this story. If Rares J had let the original case proper, Ashby v Slipper, continue until the very end, then the claims of not having ‘my day in court’ and uncontested evidence may have resulted in a totally different outcome.

Throughout the appeal the one dominate plea pushed by Ashby and his legal and PR representatives, was that he did not have his full ‘day in court’ on the sexual harassment matter. Of course, within a few months after the appeal decision dismissing the Rares’ judgment was published, Ashby withdrew the allegations of sexual harassment giving Slipper’s mental state as his primary reason. The Ashby v Slipper matter was no more. Ultimately there was no ‘day in court’. After all, the strategy had been successful. Slipper was a man broken beyond repair; Brough was to become the new MP, and the LNP the newly elected Government.

And what about the abuse of the justice system? It had taken yet another body blow.

Brough’s admission on 60 Minutes in an interview with Liz Hayes that he’d asked Ashby for Slipper’s diary entries was a matter that should’ve resulted in an immediate AFP inquiry. It was an extraordinary admission, which underscored concerns about the abuse of the administration of justice in this matter.

An abuse of the justice process sounds as boring as watching paint dry, and it is.

Is it so very important? Critically so.

The ‘administration of justice’ as a principle goes hand in hand with the principle of ‘open justice’, and they both form a key foundation stone on which any democratic society is built. Undermine it, and the fabric of your democracy starts to crumble. Extremist totalitarian and corrupt regimes, whether fascist or communist, flourish as a result.

Hence we get to the nub of the problem. The Opposition under Abbott and subsequently as Government, always seemed content to use the justice system as a political weapon in an endeavor to defeat or exact revenge from identified opponents. It has been their M.O. The pursuit of Slipper in which Brough was involved, as were others in the Government, is just one example. The Ashby affair has also raised the concern in its being just another step in the apparent politicization of the Australian Federal Police, and in on going attempts to politicize the courts.

In the last two years we have seen in operation three Royal Commissions. The Royal Commission into the sexual abuse of children by institutions has been a very fine example of how a Royal Commission should be structured and how it should behave. There was no political agenda, the terms of reference were broad and it appeared driven by a desire to get to the truth. It was implemented by the previous Government and continues despite budget cut-backs.

The Royal Commission into Pink Batts was designed to attack the Abbott Government’s political opponents, which it did although not very successfully, and has now faded into obscurity.

The Trade Union Royal Commission is similarly being used to achieve a political end. Its narrow terms of reference were designed to only identify corruption in certain unions and union officials. TURC certainly wasn’t supposed to find companies who may be complicit in the corruption, nor favoured whistle-blowers like Kathy Jackson. Turc’s performance, its treatment of company officials who’ve been called, Kathy Jackson and lack of real understanding of Industrial Relations law enshrined in High Court precedents has resulted in its abject failures so far to ‘get their man’ or ‘woman’. Its competence aside, it has now been tainted beyond repair. TURC, it seems, is proving to be ‘a bridge too far’.

These two Royal Commissions are part of this M.O.; one of using the justice system as a weapon to achieve an outcome as part of a political agenda. These are Abbott’s legacies, and therein lies the real problem for Malcolm Turnbull. He’s inherited them.

By appointing Mal Brough to the Cabinet, Turnbull runs the risk of being tainted by the odour that seems to follow the Ashby saga wherever it goes. One thing is certain. It is not going away.

If, as is being reported by the mainstream media, the AFP is continuing to investigate these allegations then questions arise as to the appropriateness of Brough to be given any Cabinet position, especially one involving probity and ethics. 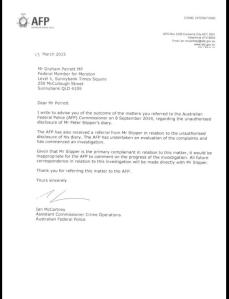 This article was published on NoFibs.com.au , 23rd September 2015.

I am a frustrated cook who is also a lover of all sport, politics, film, TV, theatre and a standard poodle with attitude called Toss.
View all posts by boeufblogginon »
← I never knew his name.